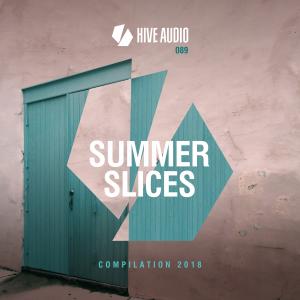 And here we are, coming big time with our "Summer Slices 2018" compilation album on Hive Audio, a massive fourteen track menu that's not only all about a hot summer mood for a reason but also an ideal showcase to introduce both brand new musical outings from the inner circle family as well as heaps of new, raw and undiscovered talent we've come across over the past twelve months.

Starting out with Matija vs Richard Elcox and their tune "Long Ago" we're taken on a trip into a detailed, yet stripped down but lively deep TechHouse universe surely employing some tribalistic vibes alongside a distinct, shuffling low end line and a well-phonky twist whereas Juzz' "Orbital" provides more of a bouncy approach based on playful bass movements an a jazzy atmosphere vibewise.

Following up is "We Are One", a track crafted by Murciano & Nakai who're deeply influenced by the Chicago trackstyle in terms of their drum foundation but provide more of an anthemic and highly atmospheric vocal approach for late night floors whilst electronic music staple David Aurel serves a "Lady Cocktail" that's well on fire with its uncompromising House beat and killer groove before Miravan's "The Music Continues" redefines a masterly shaped combination of spatial, spaced out TechHouse and seductive sexyness for this season and Anthik's "Contenance" weighs in more proper Tech vibes, a jackin' attitude, intricate melodies and a gnarly massive bass ride for peak time ecstasy.

Our friends of Smalltown Collective bring forth their tune "Kalahri" which is vibing on a pumping, yet well melodic level introducing a beautiful piano motif to the dancefloor crowd, Vanita's "Ubuntu" explores darker, sci-fi Tech territories incorporating haunting atmospheres, metallic percussion elements and a panoramic synth motif on the rise accompanied by naturalistic chants whereas SOAME's "Gracia" is fueled with well technoid, yet playful fascination for a modernistic take on HypnoTech and Marco Bertro's "Mindfluid" turns out to be a damp, sexy tool for all modern, signal loving jocks out there.

Furthermore we see Moosfiebr's "Clowns In My Soul" dance around to a clap-heavy, intricate take on stripped down House music sporting a unique, lively, deep ass bounce and beautiful string layers, "FreeFall" by Manon feat. Gitali caters a seductive slow-motion groove, magical bass drops and quite a portion of fascinating vocal mysticism whilst Meikel's contribution named "Air" is based on a hormone driven groove, tripping hoover mutations and echoes of Munich disco for the late night crowd before Normen Hood rounds things off with "Karat", indulging in crystalline NeoTrance meets TechHouse structures to be preferrably played out under the bright stars of the milky way.