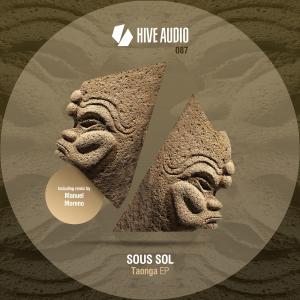 Coming up with their second Hive Audio-release after their label debut Beside You EP are Sous Sol, the Swiss-based duo which has been building up a reputation over the past years due to releases on Heinz Music, Neustadtmusic and others. Bringing on two original tracks and a remix by fellow producer on their new Taonga EP sees the production team upping their game for 2k18, weighing in more heavyweight beats for this summer season and beyond.

The title track Taonga is defo one for the heat of the night, amalgamating filtered tribal chants, multilayered organic percussions and a deep, fever'ish atmosphere with a distinct TechHouse groove and soft, ever floating pads alongside intricate, intertwined synth motifs for real late night connaisseurs on the dancefloor.

On a remix tip for Taonga is the man Manuel Moreno, turning Sous Sol's original vision upside down to present a techier, yet still deeper angle. Focusing on the tunes tribal drums and mysterious pads the remix version adds up loads of spatial pressure from a vintage synth low end, large scale production value and ever building tension whilst providing a surprising turnaround throughout the tunes' massive breakdown.

Finally Muru, the second original Sous Sol production on here, shifts gears tempowise whilst staying on a slightly Tribal-infused, atmospheric lane on which, once again, a naturalistic drum foundation meets twilight mystique, dreamlike patterns, delicate synth arrangements and a full-on dancefloor approach alongside mysterious male vocals, huge gnarly bass pulses and an overall feel of supernatural powers on the brink to what can surely be referred to as TechTrance musically.