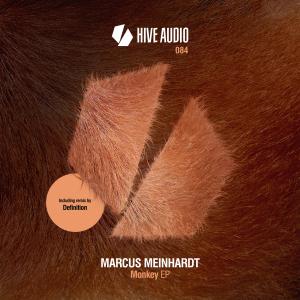 Coming up with a hot and fresh single outing on Hive Audio is Marcus Meinhardt – Berlin based DJ & producer, founder and creative head of Heinz Music, which has been heavily involved in venues like the legendary Bar25, released on prolific labels like Upon.You Records, Voltage Music, Katermukke and many more whilst also rocking crowds at our Hive Club multiple times per year on a regular for quite a while now.

With the title track „Monkey“ we see Marcus Meinhardt explore deep, spatial TechHouse territories with a quite hypnotic twist, providing Trance-inducing, ever climaxing melodies, warped vintage basslines, intricate programming and, most importantly, a floating, mystical female vocal motif able to transform a sunrise over the dancefloor into an experience of a lifetime . Beautiful.

On a remix tip for „Monkey“ is Definition who is focusing on a slightly darker, spiralling aspect in his rework. With overwhelming, big time basslines, tribal-infused percussion rolls and epic build-ups his take on the original walks the line between pumping TechHouse and (Neo)Trance for heaving crowds, being a sweet addition to the original cut for a reason.