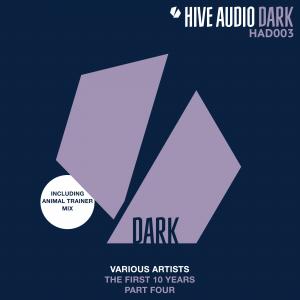 Going into our final Part Four of „The First 10 Years Hive Audio“ is Sascha Braemer. Coming in with „Monogamy“ the long time electronic staple is weighing complex, intertwined arrangements and an ethereal, cascading attitude for this ever sparkling TechHouse / (Neo)Trance fusion.

Furthermore „In Space“, an original cut provided by Swiss heavyweight Animal Trainer defo is on a well spaced out tip, focusing on beautifully hovering melodic layers evoking memories of memories of a a time when space exploration and visions of a chromatically shining, neon-lit future still shaped our perception of exciting things to come.

With the next tune that is Sons Of Aoide's „Solaris“ we see the project aiming at dancefloors focused on a mixture of technoid minimalism and spatial, spaced out as well as somewhat mystical TechHouse  sounds with its warped vocal sample. (Neo)Cosmic vintage synth eruptions and carefully layered atmospheres harking back to the fascinating era of ProtoTrance and early Trance for those in the know.

„I Don't Think About You“ by Jan Blomqvist indulges in a fast paced, iridescent variation of electronic club music incorporating both elements of TechHouse, Balearic and Tribal in combination with sweet vocalisms and vocals cut ups, a super catchy main melody and a highly seductive swing. 'A hit is a hit is a hit' they say and this is the truth for this cut for sure.

Employing „Drums & Arps“ we see Definition catering a polyrhythmic TechHouse menu for hot and fever'ish nights out, bringing on tropical heat whilst touching each and every punters hearts with ithe tunes ever evolving, shimmering synth motif.