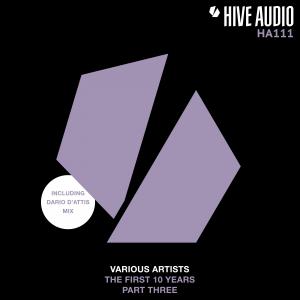 Responsible for the opener of the third part of our tenth anniversary compilation „The First 10 Years – Part Three“ is Einzelkind who is calling for a „Blackout“, weighing in a hefty, Breakbeat-infused House groove as well as a distinct, bleepy and minimalist synth motif before employing wild vocal filter techniques and brutal build-ups for the pumping high energy House crew on peaktime dancefloors.

For their second contribution to this part of the compilation album Sous Sol give us „Taonga“, a prime example of deep, athmospheric, percussive TechHouse grooves paired with seductive large scale synths, Tribal chants and well intermingling melodies.

Furthermore the artistic pairing of Definition featuring Pete Josef is in for „Caught Out“, a tune which has been remixed by Swiss staple Dario D'Attis. His take on the original cut brings forth interesting, ever repeating loop structures alongside raw vintage bass synths, sparkling, crystalline sonic clouds and an impressively longing, timeless vocal performance for most emotional experiences out on the dancefloor.

Next up on remix duty is Matthias Meyer who's taking over controls for a variation of Reto Ardour's „Bonfire“ which is a well sexy, timeless amalgamation of TechHouse and MinimalFunk defined by a hypnotic, spatial and dreamlike attitude as well as by hot, ever functional grooves.

With the next tune Definition is going all in for a remix, presenting his personal variation of „Honey“ by SOAME featuring Animor, presenting a panoramic vision of large scale TechHouse harmonies in combination with heartfelt, tender, emotional vocals for a result.

Up next we see Dario D'Attis tune „There's A“ reworked by Gorge, bringing forth a well positive uptempo attitude and gooey, somewhat Acid infused modulations for all lovers of timeless Techno and neverending nights out.

With „Orient Yourself“ the man Moses Mehdi gets back into the groove with loose percussion bits, masterly crafted filter breakdowns and a, well... , slightly Oriental vibe alongside decent glitch cut ups, perfectly fusing East and West within one tune and a little more than six minutes.

Finally Dario D'Attis & David Aurel are in for a closing with their cut „Cuentame“, waving goodbye with a very special take on Global Beats comprised of Balearic vocals and a warm, positive TechHouse swing for those in the know.